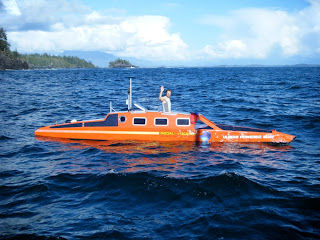 
On the 31st March, 2010 I published an article about Greg Kolodziejzyk and his pedal-driven vessel, ‘Within’. My theme was centred on his preparation for his proposed ocean crossing from Vancouver to Hawaii. I praised him for his thorough preparation, but I was premature in my assessment. He had only conducted preliminary trials of his unique canoe-like boat. When he recently ventured to sea at Ucluelet he became alarmed because his vessel would not respond to her rudder as she was heeled by the wind which was a steady 25 knots. ‘Within’ lay beam on to the seas, and despite Greg’s effort at thrusting the pedals to turn the prop at maximum speed, it had little effect, because the prop was near the surface of the water. Without forward momentum, the rudder was of no use.


Being a very open and honest man, he immediately published an article on his website explaining his concern and disappointment. He sought help to solve the problem, and people responded with ideas. The designer of the boat, Rick Willoughby, believes a larger rudder, more ballast in the stern, and a system for transferring ballast to the windward side will deal with the shortcomings. He proposes to install a transverse track for mounting the batteries, so that they can be used as the windward ballast.


Proper sea anchor trials have yet to take place, but when Greg tried using his drogue (as distinct from his sea anchor) it had little effect, because the boat remained sideways to the oncoming seas. I suggested to him that his problems could be solved by installing two daggerboards, one near the bow and the other near the stern. They would be similar to the ones fitted to Charlie Pitcher’s boat that he very successfully rowed across the Atlantic. Effectively, they made his boat ‘sail’, and yet within the rules of the Woodvale Atlantic Rowing Race, because she did not have sails she remained a rowing boat. When rowing or drifting before the wind Charlie deployed the aft daggerboard and when his boat was sideways on to the wind he adjusted the depth of the daggerboards to suit the conditions and to help steer the boat.


Greg is a pretty determined man, but he is also cautious, and I feel sure he will not undertake his record attempt unless he is convinced he’ll be able to do it without undue risk to his life. Being a belt and braces person, he will have a safety yacht at hand for the entire voyage.