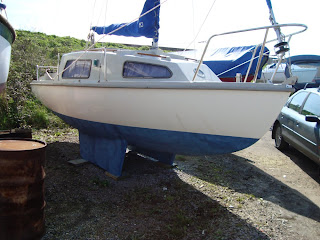 Yesterday I rigged my Seawych sloop and set her sails on her spars. The mainsail is protected from the elements by a waterproof sail cover, and the furling Genoa has a UV strip along the leech. I renewed the Genoa sheets and changed the furling line for a thicker one. Last season the previous thinner furling line sometimes snagged around the drum when it became trapped between turns on the drum. Hope fully that will not happen with the thicker rope. Whenever the sail is furled or unfurled, tension needs to be kept on both the sheet and the furling line. The mainsail has roller reefing which is done by winding a removable handle in a mechanism at the forward end of the boom. Usually it is not necessary to reef the sail beyond the first batten, which would only be the case when the wind is stronger than force 5.


Today I sanded the old antifouling and applied a coat of Flag cruiser antifouling. Two-and-a-half litres will cover 10 square metres, which is enough for me to apply a second coat. For the first time ever, I used a roller instead of a brush, and I was amazed at the smooth finish and speed of application. Flag is cheaper than competitors, but does a pretty good job at Burnham-on-Crouch. A 2.5 litre tin costs £29.50 from my local chandlers at Southend-on-Sea. After doing the antifouling I varnished all the exterior woodwork. 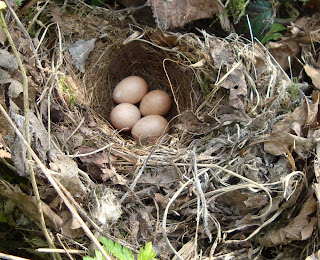 
In yesterday’s Blog I mentioned that I was a little distressed because of something I would reveal today. Well, when I removed the winter covers I discovered a nest that had been built by a pair of robins. The birds had made their home between a cleat and the cockpit coaming. The carefully constructed cradle of woven grasses and leaves contained four off-white eggs with tiny rust-coloured speckling. There was nothing I could do, because the damage had been done. The birds had flown their nest, and only later did I become aware of their calls, but I could not see them. I wondered how long they would have looked after their brood. From one of my bird books I discovered that robins usually lay between five and eight eggs; therefore the female may have been in the process of laying her eggs when I rudely and unknowingly interrupted her. Robins lay their eggs between February and July, which makes me feel not so bad about the incident, because there’s time for them to try again.
Posted by William Serjeant at 6:50 pm