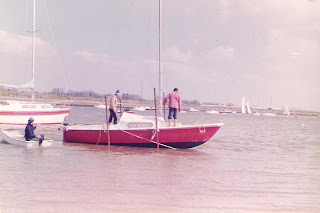 Launching 'Apple Charlotte' at the Up River Yacht Club

I don’t know if you like apple charlotte; well, I truly do. It has a scrumptious, mouth-watering acidic taste, both unforgettable and moreish. In 1981 I acquired yet another boat, a Pandora Mk 1, designed by E. G. Van de Stadt, but she was named, ‘Apple Charlotte’. Now, that’s quite a tasty mouthful when exchanging conversations on the VHF. “Mayday, Mayday, Mayday. This is Apple Charlotte in position ………. etc.” I never did like that name for a boat, but she was a fine little yacht with a great performance to match. She could point into the wind like a witch on a broomstick and magically leave her competitors trailing in her wake.


In late June and early July, 1981 my brother and I had a fortnight’s holiday together aboard ‘AC’. I had organised a Club cruise to Holland for members of the Up River Yacht Club. Altogether there must have been half-a-dozen of us, each with their respective yachts and crews. We had arranged to meet at the mouth of the River Roach on the evening of Friday, 24th July, but apart from ‘AC’, only one other yacht turned up. This did not perturb us, because all participants were to rendezvous at Ramsgate on Saturday evening.


Well, after a fairly quiet night in the lee, just into the Roach, beyond the Branklet Spit Buoy, we broke out the anchor and cleared it of centuries-old black tenacious mud; the same mud that has preserved parts of HMS Beagle at Paglesham. The stuff is called Roach Sludge and it could be sold by an entrepreneur for a fortune to gullible people in foreign lands who crave for tangible history.


The Shipping Forecast was good, predicting northwest 5, backing west 3 or 4, but with showers. Full sail had us running out to the Ridge Buoy at a rate of knots. We continued to Barrow No. 7 and the Southwest Sunk Beacon for the Edinburgh Channel. When clear of the sands we steered a course to North Foreland, and by 1300 ‘AC’ was about a quarter of a mile east of the distinctive hexagonal lighthouse perched above white cliffs, and by 1325 our boat was moored to a large buoy with other yachts in Ramsgate Harbour. Before nightfall a few Up River Yachts had arrived, including ‘Umande’, a Westerly Centaur owned by Ken Phipps, and ‘Lamorna 11’, a Pegasus 700 owned by Ken Mathias and a Colvic 26 owned by David Ince. 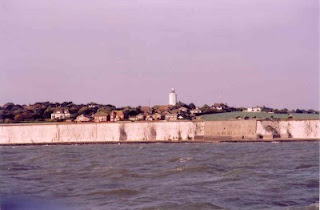 
That evening after dinner, we gathered aboard David’s yacht, as she was the most spacious. We speculated what had happened to John and his wife who owned a Fairey Atalanta. There were different opinions as best how to proceed. Some wanted to sail directly to Dunkerque, while others thought it better to stop off at Dover. My brother and I opted for Dunkerque. Gales were forecast for Trafalgar, but that was a long way off, and as the wind was from the west, we cleared Ramsgate Harbour on Sunday morning, 26th July at 0248 to make best use of the tide. Our course took us between the Goodwin Sands and the Kent Coast, so as to arrive at the South Goodwin Lightship on that grey morning at 0550. I didn’t envy the Trinity House personnel who spent their working lives aboard her. Even then, with only a west-by-south wind of force 3, the ship was rolling. On 27th November, 1954, her predecessor broke loose from her mooring during a gale and succumbed to the Sands, with only one man surviving.


From the South Goodwin Lightship we broad-reached to Dunkerque Harbour were we berthed at a pontoon shortly after mid-day. For me it was a thrill to be in this special part of France, because of the sacrifices made there in 1940. Hitler’s army had pinned down an allied invading force, consequently Churchill organised a fleet of privately owned vessels to pluck survivors off the beaches while they were being mercilessly bombed by the Luftwaffe, but for us that gorgeous Sunday afternoon there was no hint of conflict, warfare, tragedy or of death. The sun shone, the gulls mewed and life was very pleasant. My brother even bared his chest, in an effort to get a tan! 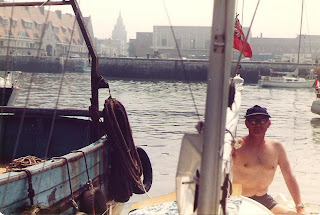 You are right to be biased to his designs. I've owned three of his boats: The Pioneer 9 which you kindly made a link to in my Blog -

plus my Pandora featured in this article.