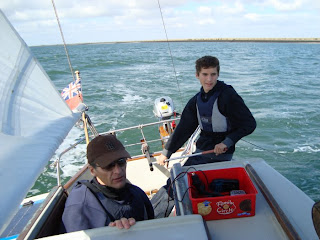 For the greatest enjoyment, things have to be ‘just right’ and yesterday all the factors fell into place to bring about a pleasurable experience. Good weather, good company, teamwork, a common purpose and unique circumstances combined to make a fulfilling few hours afloat for me and my crew.

High water at Burnham-on-Crouch was for 1823, which meant low water would be at 1213; accordingly we planned to arrive at our Rice and Cole mooring by 0940 for sailing at 1000. The idea was to take the last of the ebb towards Maplin Sand while tacking to seaward for as long as we could before the wind and tide would swish us back to Burnham. Unusually for this year, an area of high pressure was slap over the British Isles causing the wind to blow from the North Sea straight into the entrance of the River Crouch, and with the tide ebbing against the wind there was a fair old chop.

All went to plan. To begin with, as we left the mooring under power, there was a good Force 3 from just North of East. As soon as we were clear of the moorings we made sail and turned off the Honda outboard. In anything above force 2, ‘Ladybird’ always sails better with both sails reefed; therefore I put in several turns on the main and rolled the Genoa to resemble a working jib. Despite the rough water, we made excellent progress to windward. We hadn’t seen so many yachts out and about as there were on Saturday morning. All of them were bigger and more powerful than our tiny Seawych cruiser, and needless to say, we were overhauled by a few of them. When in close proximity to other yachts we waved to their crews, and apart from one rather large yacht, we were greeted by enthusiastic reciprocal gestures. Everyone was having a great time in the sunshine and invigorating wind.

By eleven fifteen it was time for Mars Bars and coffee and with three of us aboard we took turns at helming. For me it was doubly pleasurable, because I could see that what my crew had learnt over the summer was being put into practice. I could leave the boat to them and feel quite confident we would not run aground or crash into another boat. They could trim the sails, luff or release the mainsheet in stronger gusts, tack and gybe; they could even heave the boat to. I could be confident they would be able to pick up our mooring or set the anchor.

Between 1230 and 1300 we took turns at the helm while others ate lunch and guzzled soft drinks. As I expected, the wind increased to almost a Force 5 and slightly backed. This was due to the sun warming the landmass to the West causing the convection of air from above the cooler sea to the East, but because the tide was flooding the water did not get any rougher. A further reduction of sail was necessary, and despite our efforts at gaining ground to windward, we were gradually moving stern first towards Burnham. Our options were to stick at it, anchor, or explore the entrance of the River Roach. We chose the latter, and in a short time we found ourselves hurtling past the Branklet Spit buoy into the River Roach, but prudence made me test sail the boat in the opposite direction to ascertain if we could make over the flooding tide and as I suspected ‘Ladybird’ was on the wind, just edging forwards.

Back in the Crouch, wind and tide overcame us, leaving us with the option of anchoring or returning to our mooring for a cup of tea. Needless to say we chose tea. The brand new Honda 2.3 started at the first pull, so that we could head into the wind and take in sail. My crew faultlessly picked up the mooring, and while the youngest brewed tea the others made the boat ready for being left at her mooring. Wanting to enjoy the moment, we took our time before rowing the dinghy to the Rice and Cole pontoon.

All in all, things had turned out ‘just right’ because circumstances had come together for all of us to have a time of pleasurable companionship afloat.
Posted by William Serjeant at 4:09 pm