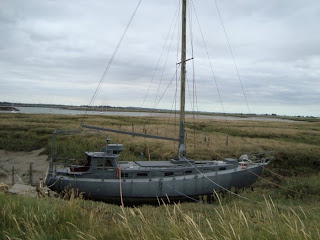 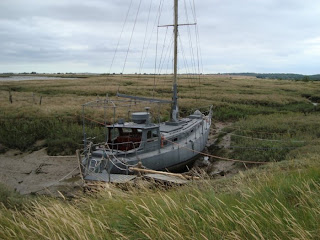 I noticed this ‘concrete’ boat tucked away in the salting at Hullbridge, and I couldn’t resist taking photos of her. It’s obvious she’s not been sailed for a while. She must date back to the 70s when many Ferro-cement boats were built, mostly by amateurs. The huge radar housing on the doghouse is typical of the time; likewise the outdated, rather large GPS antenna is reminiscent of that era. She has a tabernacle for lowering her mast, but the permanent framework for the cockpit tent would prevent it from being lowered to the horizontal position. The doghouse provides excellent cover for the crew from the sun, wind and rain. I like the useful hand rails along the cabin top, and the side decks make it easy for the crew to reach the foredeck. I think the permanent back runners should be modified to have a quick release mechanisms so that the mainsail can be squared off when the boat is running. Both foresails have to be hanked to their stays - roller reefing would be far more satisfactory. I like the trough at the base of the mast for stowing the halyards. The fore hatch would be useful for ventilating the boat when she’s at anchor, but it is rather too small for the crew to enter or leave the boat. Her owner has slapped grey paint over everything, presumably for protecting the vessel from the elements, but it doesn’t make her look attractive. The general state of the boat leads me to believe she may be for sale. My imagination runs riot when considering what could be done with her, and if I wanted a large project, I would make enquiries at Brandy Hole Yacht Club to find out who owns her.
Posted by William Serjeant at 9:35 pm

I have a 1978 Samson C- Baron 55' Ketch sailboat with Ferrocement hull. Having trouble finding anyone to insure her to satisfy my dock owners. Help?⚓⛵I am in the USA.

I hope someone will be able to help you to find an insurer.