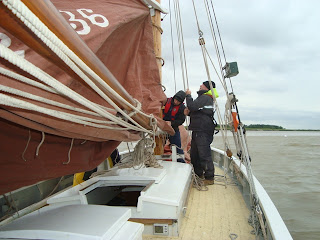 
The forecast was SW 6, which was almost ideal for the smack ‘Electron’. She was moored in the protected waters of Pyefleet Channel, and there a crew of six boarded her at approximately 1000 today to make her ready for the Old Gaffers Race. There was some uncertainty about the time of the start and the course, but the Race Officer finally opted for a course that took us into the mouth of the River Blackwater. 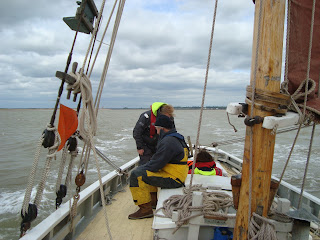 Tramping Along.
The start was at 1240 on a line from Bateman’s Tower. We had a very fast, fine reach towards number 8 red can buoy. From there, we brought her round hard on the wind, and we had to put in several tacks towards the windward mark. With tide against wind a lot of spray came over the decks and the occasional wave rolled along the leeward gunwale.  The liveliest part of the race was north of Bradwell Power Station where the making tide surged into the narrows whilst opposing a strong wind that funnelled out. 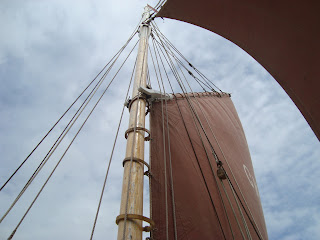 
We didn’t see many competitors, because from the start we were with the leaders. As the race progressed to the south of Mersea Island, only two yachts where ahead of us. One was a large ketch, the name of which I fail to remember, and the other was a smart double ender that beat us to the windward mark. From there we rapidly overhauled her on the downwind leg. We piled on sail, and ‘Electron’ ran like a scolded cat, throwing aside the breaking waves. 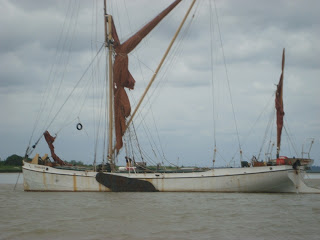 
It seemed that in no time at all we were racing by the Nass Beacon where we overtook the second yacht. She immediately laid a course inshore, presumably to avoid the adverse current, but we headed directly into it towards the next racing mark. By the time we arrived there, we were far ahead, except for the large ketch with the tan sails which was only a smudge on the horizon, pointing the way towards the finish. 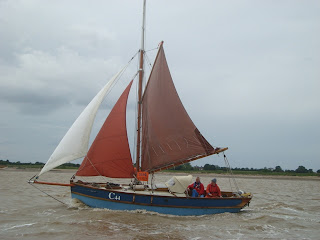 A pretty entrant from Holland.


The wind veered a trifle, causing us to be close-hauled towards Mersea Stone, and for a quarter of a mile beyond to the finish. There we smartly lowered all sail as we motored directly into the wind heading for our permanent mooring. The race was over, and we had had a thumping good time.

Posted by William Serjeant at 10:23 pm