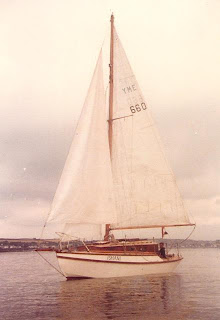 Sailing is one of those activities that draw people together in their common interest; friendships are established and strengthened by sharing. Cruising folk look to companions for adventuring together. On rare occasions, friends will co-own a vessel, share expenses, help with maintenance and cruise together. More commonly, owners of yachts will want sailing companions to crew for a cruise, or part of cruise. Both the owner and his crew benefit from joint enterprises, maybe club handicap racing, an afternoon’s sail or a cruise lasting several days.


Friends of mine have crewed for me and I have crewed for them. I was touched and delighted when Bill asked me to be his companion for a cruise to the Azores. We had cruised before and we had confidence in ‘Ishani’, as she had proven her sea-keeping qualities when we cruised to the Scilly Isles from Combwich, near Bridgwater, where the home-built Eventide was kept in a mud berth, a little more than a stone’s throw my friend’s home.


After provisioning the yacht and saying our goodbyes we cast off lines and made sail for Steart Island by Burnham-on-Sea, via the River Parrett. The time was 1450 on 21st May, 1987, and there was a light northerly, which necessitated using the Yanmar diesel auxiliary engine. Our plan was to anchor to the east of the island near number 9 starboard hand buoy. There to take rest, have a meal and get underway at midnight for the ebb down channel past Minehead, hopefully to Watermouth, arriving there at slack water. All went to plan, so we dropped anchor for a well-earned rest until the next high water. It was not profitable to motor against the fast flowing water which gurgled along the hull, occasionally brushing bladder weed against the sides.

1 John 5:5 'Who is he who overcomes the world, but he who believes that Jesus is the Son of God.'