I was so tired I could have slept anywhere, almost under any conditions. As it was, the wind increased overnight, and by early morning there was a good Force 4 blowing straight into the harbour. Something must have warned me things were not quite right. I lifted the side of the tent and had a look around. I was astonished to discover that ‘Phillida’s’ anchor had broken out, and that she was drifting towards a group of rocks. It was high water, and because the anchor warp had not been long enough to accommodate the rise of tide, the anchor had pulled clear from the seabed. I rapidly released most of the fastenings that keep the tent in place and pushed it forward along the boom to give me space for starting the engine. As we drifted closer to the rocks, the water became shallower, and the anchor dragged along the bottom. I hoped it would hold, but unknown to me it had collected a knot of weed. This had the effect of reducing boat speed until we came within an arm's length of a mooring buoy. I grabbed it, and made its line fast to the bow cleat. 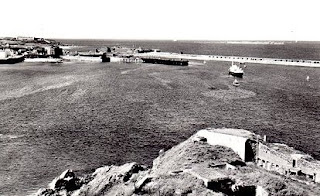 Braye Harbour is open to the northeast. Therefore I was glad to have the security of a good mooring. Although it was July, the wind was bitterly cold, which persuaded me kept the tent up to act as a windbreak. I tried conserving my body heat by wearing a couple of sweaters, a bobble hat and my waterproof anorak. Needless to say, being on the boat while she snatched against the mooring, rolled and pitched for twenty-four hours was a most uncomfortable experience. I expended quite a bit of energy trying to keep myself from being flung off my pneumatic mattress. The motion was diabolical. I listened to the radio to cut out the sound of the wind and waves and to cheer myself up, but the weather forecast confirmed I would have to endure the agony until the following morning. It was far too rough for me to get ashore by using my folding dinghy. 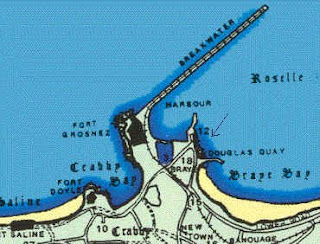 
After a fitful night I was relieved to find the wind had dropped, and that the sun was shining. I took the tent down and made breakfast. The smell of fried eggs and bacon caused me to salivate at the prospect of eating them, along with porridge, toast and marmalade. Shortly after clearing away the dishes and utensils I was visited by the owner of the mooring who gave me permission to use it for the duration of my stay. He told me where I could find freshwater, and he gave me directions to the post office and to Lloyds bank.


I really looked forward to exploring the Island, and in preparation for being ashore for most of the day I made a packed lunch. It turned out to be a scorcher. Although I wore shorts and a tee shirt, the sweat poured off me as I slowly climbed the narrow road leading to the hamlet of St Annes. There I withdraw cash from the bank and noted where the phone box was. 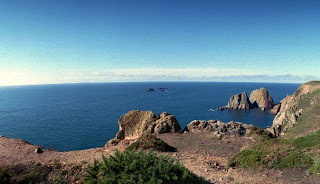 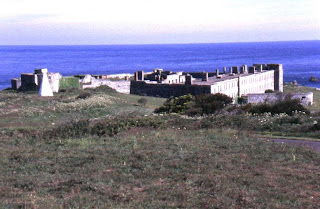 
I spent the rest of the day tramping the island. I couldn’t fail to be moved by the fortresses that had been built during the war. They were built by slave labourers who had been shipped to the island by the German occupying forces. Many of these unfortunate prisoners suffered greatly while working on the fortifications, and a number of them died. At the end of the war German and British soldiers worked together to clear and prepare the island for re-habitation. Miles of barbed wire were taken down and thousands of mines were neutralised and recovered. I was able to walk freely around a significant portion of the island, and while doing so I was enthralled with the enchanting scenery, particularly views from the cliff walks. 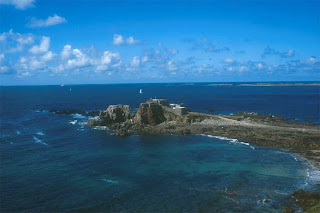 On returning to ‘Phillida’ late that afternoon, I cooked a meal. After I had eaten it, I rowed ashore to phone my wife - there were no mobile phones in 1971. When I heard her voice I became a bit emotional, because I had missed her so much. I hadn’t realised how important it was to share my thoughts and experiences with her. I was doubly shocked when she told me I was required to attend an interview the following Wednesday for a teaching post in Edinburgh. That meant I had to make the return passage soon - while the weather was good. Needless to say, I was excited at the possibility of a new career.


My priority was a good night's sleep so that I would be refreshed and ready for the return trip to Exmouth.
Posted by William Serjeant at 10:41 pm