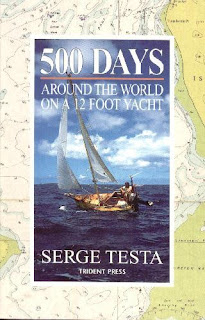 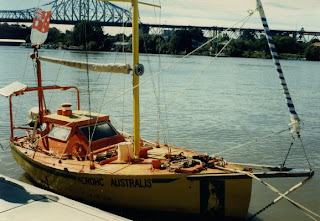 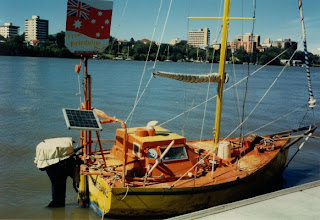 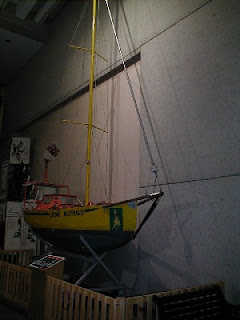 ‘Acrohc Australis’ is the smallest boat to have sailed around the world. Setting out from Brisbane, Australia, in June, 1984, and returning in May, 1987, Serge Testa logged a distance of approximately 50,000 kilometres. In all, he spent 500 days at sea, while averaging 100 kilometres a day, i.e., 4.16 kilometres an hour - that’s a speed of 2.246 knots. Now, that’s pretty good for an 11’ 10” boat with even less LWL, perhaps 11’. This aluminium micro-yacht has a 5’ beam and draws 5’; she was designed and built by Serge who learnt metalworking when he lived in France.


Serge moved to Australia, and there he became interested in sailing. He acquired a yacht that had sunk and brought her back to life. He confessed it took him quite a while to teach himself to sail, and in the process, sank the boat! Desperate to do some cruising, but short of funds, he designed and built the 11’ 10” ‘Acrohc Australis’. On June 9th 1984 he set off from Brisbane for a shakedown cruise northwards. After a series of groundings while working his way along the Queensland coast he realised he needed to add a bowsprit to make the sail plan balance. Achieving this, he sailed via the Torres Strait to Darwin. From there he crossed the Indian Ocean to Madagascar, visiting Cocas Keeling Islands, Mauritius, and Reunion, but when he arrived in Madagascar he was suspected by the Authorities of being a terrorist. The Indian Ocean had been a baptism of fire, not just because he survived an onboard fire, but because he experienced 4 cyclones, during which his boat was knocked down. He had to endure the torment of a severe rash covering his body, caused by dampness and extreme heat within the enclosed cabin.


From Fort Dauphin, Madagascar he sailed to Durban, where he had to wait three months until the season was right for sailing to Cape Town, but this stretch of the Ocean lived up to its reputation of being difficult, because of contrary currents, strong winds, big seas and the presence of many ships. When he arrived at Cape Town there was a very bad storm, and because of being fatigued, he fell asleep, only to wake up when his yacht crashed over rocks before ending up on a sandy beach. His boat was transported overland to a local yacht club by members of the club. In January, 1986 he sailed to St Helena Island, where he had to wait for finances before he could continue. Afterwards he visited Ascension Island, then he continued to Natal, Brazil, but because he did not have a Brazilian visa, he could only stay there for 3 days. From there he sailed to Cayenne, French Guiana, Tobago, Isla Margarita and Puerto Asul, Venezuela, where he waited for the delivery of a Satnav. This device was a boon, for Serge could know his precise position, which gave him the confidence to sleep when his boat was well away from the hazards of land and shallow reefs.


Arriving at Colon in July, 1986, he prepared his vessel for transit of the Panama Canal. Panama to the Galapagos Islands was the most difficult leg of the whole circumnavigation. At one time he thought he would not make it, because of contrary winds and adverse currents. The severe growth of barnacles was a constant problem, causing him to enter the water at least once a week to scrape them off. He estimated that marine growth on the hull could slow his boat down by one knot. In fact, during the entire circumnavigation he regularly dived under his boat to keep her free of growth, except when in the vicinity of the Cape of Good Hope, where the presence of white sharks made it too dangerous. On arriving at the Galapagos he was told that he could only stay there for 5 days, which was a big disappointment. From there he sailed to the Marquesas Islands, the Tuamotu Islands and Tahiti. He reckoned the most enjoyable part of the whole circumnavigation was a 30 day run to the Marquesas Islands from the Galapagos Islands.


In January, 1987 he continued to the Cook Islands, then to Tonga, from where he sailed to Norfolk Island, but he was caught at anchor on a lee shore, causing him to make a quick exit by cutting the anchor rode before making out to sea. A month later he arrived at Lord Howe Island where he became ill, suffering from a staph infection. Despite tiredness and being ill, he persevered with his voyage. On May, 16th he arrived home at Brisbane, happy and relieved, but sad at having to leave ‘Acrohc Australis’ which had been his home for 3 years.

When I visited the Queensland Museum, Brisbane, in August, 2006, I took photos of ‘Acrohc Australis’, and later posted them to my old small sailboats web site, along with photos my Australian friend had taken of the boat shortly after her marathon circumnavigation. A few of these photos can be seen above.


I believe that one day, someone will complete a solo circumnavigation of the world in a smaller boat than ‘Acrohc Australis’. During an interview with Christy and Noel Davis of the Furled Sails Podcast web site, Serge said he was surprised and disappointed that no one had beaten his record.


He subsequently sailed around the world again, but in a 60’ yacht built by him and his wife.


Serge Testa’s web site publicizing his book: ‘500 Days around the World on a 12 foot yacht’

Dear Bill, Serge done a fantastic job with his circumnavigation, he made sure that he got the most out off it. there where moments when he thought of giving up, which to me is entirely natural. He earns all the recognition from all Australians. Bill Nance on the other hand is the most unrecognised Australian circumnavigator, a true champion, who capsized in the roaring forties, on reaching Fremantle for repairs was shunned by the Australian customs and left to repair in New Zealand. this was in 1962-1965 to become the first Australian solo navigator. Kind regards Geoffrey Galpin.

Thank you Geoffrey for that input.
Cheers,
Bill.